So what is special about Aradhena Village? 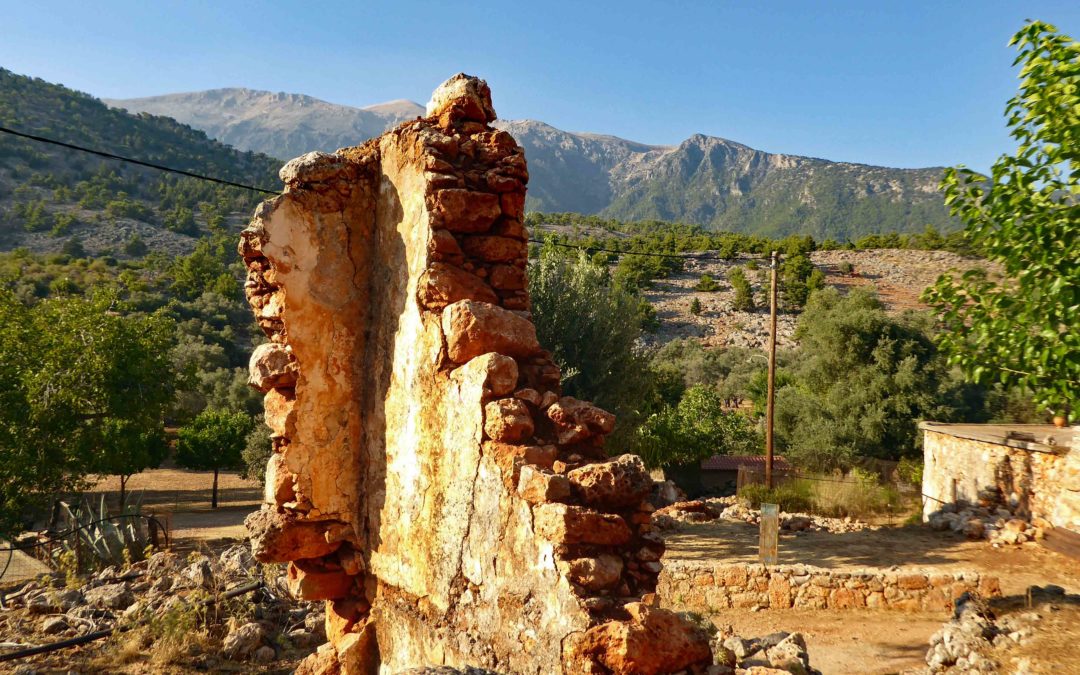 Most of those who know Crete would say that it’s the start of the Aradhena gorge. In fact it isn’t, the gorge starts some 8 kilometres further up in the White Mountains. If you are looking to select a gorge to hike, check out our recommendations

Often unnoticed by hikers intent on getting down into the Aradhena gorge, is the abandoned village of Aradhena.

Seen here in the late afternoon sun, golden colours of the ruined stone houses have a charming and romantic feel.

Why is it deserted?

But this wasn’t just a case of people moving away from the village as work dwindled. Or as so often is the case for these mountain villages, opportunities arose elsewhere and the younger generations left to seek their fortunes.

No, a quite different and darker fate befell Aradhena.  It all started in 1947 with a dispute between two boys about a goat bell.  The Sfakiots are renowned for their fiery tempers, the defence of their honour, their determination to revenge and avenge, and their obstinacy.  The dispute developed into a bloody feud.  This vendetta developed between the two families and all but wiped them out. The few remaining inhabitants of the village fled to Anopolis.

How did the bridge get built?

And it seems strange that in this remote place, there should be a link with a business empire which spans petroleum and shipping, to banking and media, to real estate and hotels, to publishing!  The 1.8 billion euro empire of Vardis Vadinogiannis, in 1986 paid for the metal girder bridge which now links the two sides of the gorge.  And the reason?

Agios Ioannis, a tiny village and the end of the road, was  their ancestral home!

Previously getting from one side to the other involved climbing down the zig zag path  to the floor, 138m below, and then climbing back up the other side.

It’s a short drive from Anopolis village to the head of the gorge.  There’s a little cantina there serving “local” yoghurt (it used to come from a dairy on the Anopolis plateau, but now is brought in from Vrysses in the Apokoronas in the north).  The honey is from these parts, though, and the combination is glorious.

But still the ruins have a silent poetry, elegant shapes and golden colours, infused with a quiet sadness.

The south coast is a good day out from the villa, and if you dont want the rigours of hiking the gorge, you can see Aradhena village and have a relaxed time on the Anopolis plain – the Anopolis Taverna is a good place for a meal.

More about living in Crete

There is much more in our blogs. These show things to do in Crete, whether it be walking a gorge, hiking in the foothills of the White Mountains, or taking a drive to see the sites.  Chania is a great town to visit, particularly to go to the street markets, and of course you’ll want to get the benefits of the Cretan diet – be it the yoghurt and cheese, or the olive oil.

And if you would like to live in a place where you can see these, here is just the place. This is a dream villa which we designed and built 10 years ago and now reluctantly are ready to sell and move on. Its in the Apokoronas, in the west of the island, 35min drive from Chania, 50min from the international airport.